And once we have that information, we gather that on our whole team, this is not the point to differentiate between high potentials and non-high potentials, once we have that information we actually use that to inform and populate what we call our succession bench. And the success bench is essentially a detailed overview of every individual that could possibly be a successor to a role. And as I said this is not the time to differentiate whether they’re high potentials or not, what we do with the succession bench is we actually divide them into A, B and C categories with the A being the most ready, B being maybe three to five years before they were ready and our C level folks would be five years or more before they would be ready to move into that position. The nice thing about this development bench is certainly having a clear overview of who can move into the role puts you probably ahead of most of your competitors because many people aren’t doing succession planning as well as they should. But there’s some other cool things that we can do with this. For example, we can use the succession bench to drive our development decisions and essentially inform where and how we spend our development dollars. The other really neat thing about this is if you remember we’ve divided people into level A, level B and level C. At a very high level, we would expect level C individuals likely a little more junior in the firm, less experienced and so forth, doesn’t mean that somebody that doesn’t have a lot of tenure at the organization wouldn’t be in there, but essentially we never want people to stay in these levels for very long so what by monitoring movement between level A, level B and level C it really gives us an idea of how engaged our employees are. For example, if I was level A and I actually move down levels, that should be a serious concern, especially if this individual had been a high potential. If I’m stagnant and I’m staying in a certain level for a long period of time, that can mean a lot of different things too but essentially there’s likely an issue there it can identify maybe somebody that’s thinking of leaving, so there’s a lot of really neat things if we’re monitoring movement between those levels, but essentially having that high-level view of your succession bench I think can be really powerful in driving your decisions. And finally what it does is it evaluates just essentially the general health of your bench for a specific role. So for example in terms of best practices what we like to do, what we shoot for is having at least three individuals in the level A category, so at least three individuals that are in a position to move into that role if we needed them to. So that’s sort of our target, that’s our best case that we want to get to with all of our succession plans, certainly not going to happen overnight but it’s a great goal and it’s a great…also a great way to measure the success of your succession plan the more roles that you have with at least three individuals in that level.

Every company needs to know who could step into a key job when the current employee moves up or moves on to another role. This succession plan protects the company from the risk of losing a top executive or key employee unexpectedly, and helps prepare for planned personnel changes, such as retirement or promotion.

The Succession Bench allows you to: 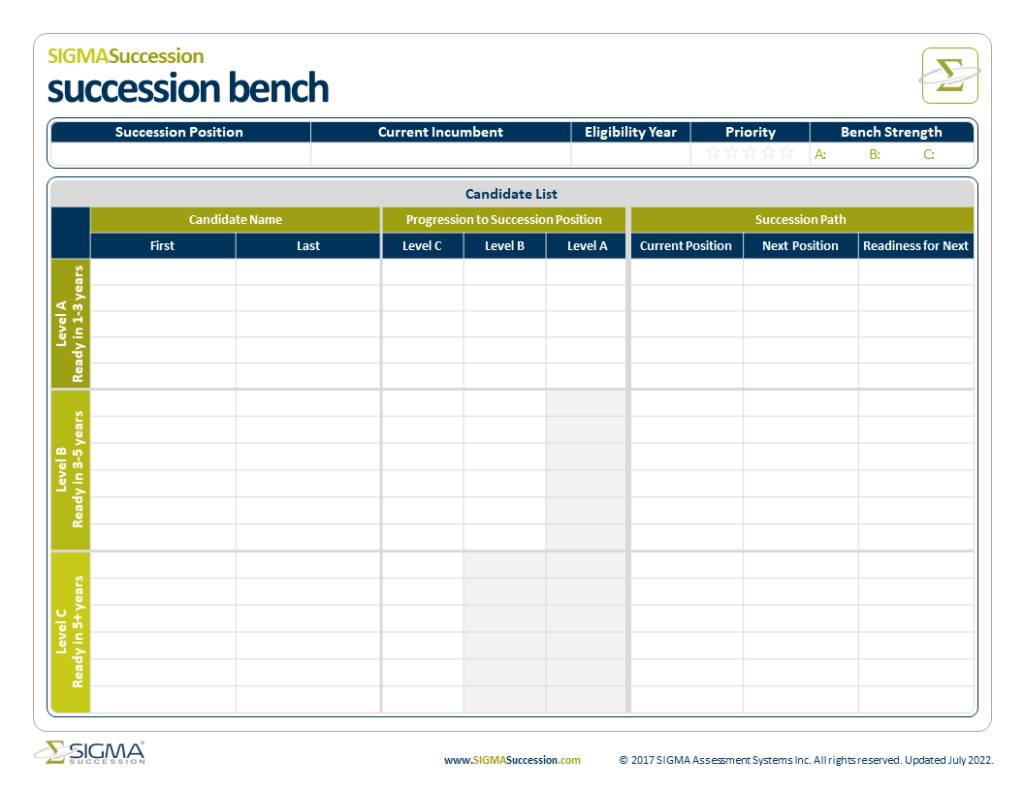 After your succession planning team completes the nomination process for a critical role and validates the results, you’ll have a number of potential successors in varying stages of readiness to take on the position. The Succession Bench lists them along with key information about their current position and function in the company, and projected level of readiness to succeed to the new role.

The Succession Bench is typically divided into three levels of successors, based on their readiness score. Level A candidates are ready to take on the role today, or within the next three years. Level B and C candidates need further development and will be ready within a longer projected timeframe. This information comes from the Nomination Surveys completed earlier and validated by the succession planning team. It may also be based on the urgency of the need to replace an incumbent whose exit from their position is planned or known.

This clear overview of your succession pipeline for each critical role allows you to:

1. See how strong your bench is at a glance

Ideally you will have at least three Level A candidates for all your critical positions. The Succession Bench chart quickly highlights any key roles that don’t have three individuals ready to succeed, and enables management to work toward addressing this gap.

2. Track succession candidates’ progress from Level C to Level A

Measuring the time it takes individuals to progress through the readiness levels is an excellent way to monitor the effectiveness of your leadership development program. You want to see continual, consistent progress when looking at all your succession candidates as a whole.

No company has unlimited resources, and a tool that helps pinpoint where to spend them is always valuable. The Succession Bench can help inform how you spend your resources and maximize your return on investment. For example, if your leadership pipeline is empty and your urgency to replace key roles is low, it may make sense to invest more in Level C succession candidates and build bench strength over the long term.

The value of the Succession Bench is infinite if you use it as an active document. Your succession planning team should review and re-evaluate these charts at least once a year with all the relevant stakeholders. You should also revise it whenever there is any change in the role. In this way, you can ensure you are always prepared to address personnel changes in your company’s critical roles.

You can also use information from the Succession Bench to help build credibility for your succession process among your leadership team. Measure succession candidates’ movement between readiness levels and the number of ready candidates, and communicate this to senior management at least annually to keep succession top of mind.

Contact us to learn how we deliver a detailed 12-month succession plan for each member of your leadership team in just two half-day workshops.

Talk to an Expert

If you’re interested in learning more about SIGMA’s succession planning services, Glen is the guy for you. He knows our material inside and out, and can tell you first-hand stories of the work we’ve done with our clients. And just so you know, Glen doesn’t do sales – he does solutions. That might mean answering your questions, giving you our best tips and tricks, or pointing you to our FREE resources. Send him an email or give him a call! He’d love to chat with you.